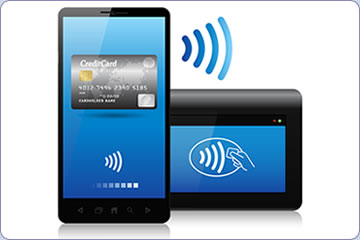 Near field communication (NFC) is a set of standards for smart phones and similar devices to establish radio communication with each other by touching them together or bringing them into close proximity, usually no more than a few centimetres. Present and anticipated applications include contactless transactions, data exchange, and simplified setup of more complex communications such as Wi-Fi.Communication is also possible between
an NFC device and an unpowered NFC chip, called a "tag".

This is not new technology in fact, the first patent for NFC technology was issued in 1983 but it would be 2007 before the technology was certified by MasterCard. PayPass commercials featuring the elephant who was concerned about his zookeeper, highlighted both the features and potential hazards of Near Field Communication. It made using your credit card so easy, that even an elephant could 'Charge It'.

For years, security issues have been addressed and it appears that 2015 will be the year that NFC terminals finally begin making their way into more and more businesses.  Solutions related to Google Wallet and ApplePay are popping up everywhere!  The various networks and processors are busy creating the programming needed to support these exciting new technologies!

Contact our team to see if NFC is a good solution for your company!

About Us
Avoid The Pitfalls
Educational Resources
Referral Relationships
Services & Solutions
TMC Store
Contact Us
“
TMC Is always available when I call and are very responsive. The prices are very competitive and I feel like I am part of the family. Thanks
”
Peggy Haskin, 11/8/2017 12:00:00 AM